Apperantly it was Christmas Eve today. And I find that very hard to believe. I mean, I spent the afternoon at the beach in shorts and a tank top with a burning sun on my skin. It’s Christmas Eve and I was at the beach!! I’ve heard it’s only a few degrees above freezing with rain in Sweden. Not even my grandma and grandpa up in the “north” have snow which they always normally have this time of the year. I’m glad I have summer weather instead of that. Even if a Christmas is supposed to be white.

In the morning I skyped with my mom and her friends she spent Christmas with. It was nice, but I didn’t feel any homesickness. I’ve been looking forward to experience all the American holidays so I hardly even think about how it is in Sweden.

After that I wanted to go to the beach and thought at first that I would go alone and read. It was such a beautiful day, about 22C and not a single cloud in the sky. Then I remembered that Johanna was off too, so I picked her up and we went to Ponto Beach. Before I left home my hostdad asked me if we were gonna do the typical “Christmas at the beach” pictures and I didn’t even think about that. So I packed my santa hat and both of us played model and photographer. It was really fun and we got some really got pictures!

And that wasn’t all. We sat there talking for a long while too, and we didn’t just see a lot of surfers out in the water. We saw some dolphins kinda far out for once. And the most exciting thing we saw was WHALES! I’ve never seen whales before so I was so happy when I saw the big water fountains on the horizon. And that’s not it, I actually saw the fin of the whale and the back when it was coming up for air. It was just so cool! I can’t wait until I see them upfront on Hawaii on that whale tour I’m going on.

When I came home I helped with preparing the big feast and then we ate it. Everything tasted exactly the same as in Sweden and it was so incredibly delicious! It really felt like Christmas, and with that big Christmas tree in the background too. It was just so nice. My hostdad made a video and asked us all what we were thankful for this Christmas. The girl was thankful for that she didn’t have a fever, just a cold, the boy was thankful for his family and the food and then he added me and baba (grandpa) too. My hostmom was thankful for her family and that I was there celebrating Christmas with them and that made my eyes water. My hostdad was thankful for family and the food too. Then the girl made him add something untraditional like that he was thankful for his unsassy daughter from that point on. Haha! I said that I was thankful for this amazing opportunity I got to come here. I hope they realized that I meant to come here and stay with them for this year. That thankful-question came out of nowhere and I wasn’t really prepared to answer it. But I am extremely thankful for my hostfamily, they have been the best possible and because of them I’ve had the year of my life. It will be really sad saying goodbye to them in a way too short time…

For dessert we had risalamande (sv: ris a la malta) which also was really good. The only Swedish thing I missed today was the rice pudding this morning because I was sleeping. But that was fine, it was nice sleeping until 9:30am.

I can’t say anything else than that I had an amazing Christmas Eve!

The last piece of chocolate was gigantic for once!

And here come some of the Christmasy photos from today. A lot of ego, sorry… but I couldn’t choose just one. 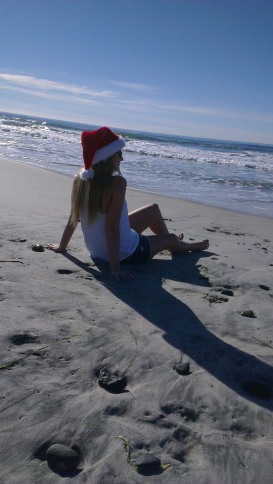 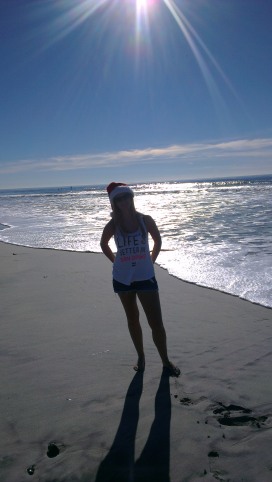 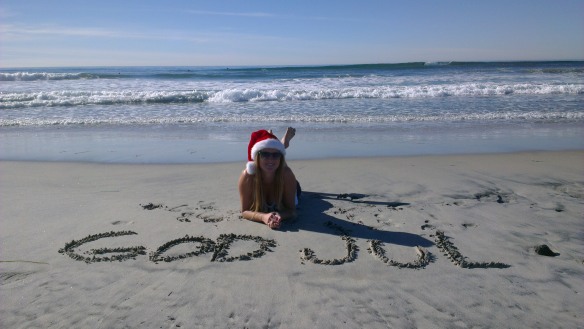 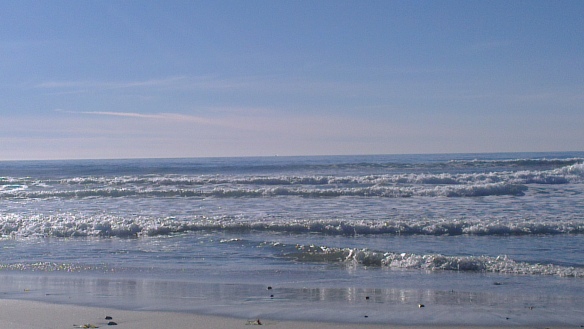 If you look very closely in the middle of the horizon you can see something tiny above the water. That’s part water spray, part whale. It was much clearer in real life, but this was the best picture I got of it, haha. Sometimes I wish I had a good camera, but then again, I wouldn’t want to carry that big thing around all the time, so my phone is good enough for almost everything. It actually takes surprisingly good pictures for a phone, don’t you agree? (All of the photos on this blog has been taken with my HTC One)